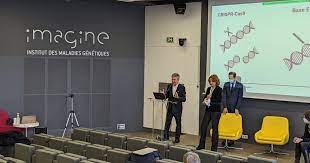 A pioneer in research and treatments based on gene therapies, or derived from them, the University Hospital Institute (IHU) Imagine (Assistance Publique-Hôpitaux de Paris, Inserm, Université de Paris), located at the Hôpital Necker-Enfants malades AP-HP, presents the latest advances in this field, recent successes and new tools in development, ahead of International Rare Disease Day, February 28, 2022.

Gene therapy research holds great promise for patients, but it is a good example of how long it takes to validate a new clinical study. It has taken 20 years of work to achieve clinical results in certain diseases that have transformed patients’ lives.

Today, thanks to new research and cutting-edge methodologies, the strategy is evolving, the gene could no longer be replaced but corrected, just as gene therapy would address a much wider range of organs and diseases. The teams at Imagine and at the Necker-Enfants malades campus are working on these approaches, which foreshadow the medicine of tomorrow.

Institut Imagine is home to research teams at the forefront of this therapeutic approach, and some of its researchers were the very first in the world to conduct clinical trials and have demonstrated the success of this approach for certain diseases. Alain Fischer, Marina Cavazzana and Salima Hacein-Bey-Abina who successfully conducted the first trials in children with X-linked severe combined immunodeficiency, the so-called “bubble babies”, in 1999.

Since then, gene therapy has continued to improve and is now deployed for many other diseases. At Institut Imagine, a reference institute for research on genetic diseases, with the reference centers and clinical departments of the Hôpital Necker-Enfants malades AP-HP, this approach is being explored to treat diseases of the blood, immune system, metabolism, brain, central nervous system, eye and skin.

The techniques have also diversified, with ex vivo approaches (modification of the gene in cells taken from the patient and then reinjected), in vivo (transport of the modified gene in the patient’s cells by a vector, most often viral, injected directly), or by the use of “molecular scissors”, enzymes that act on a highly targeted fragment of a gene directly in the cells.

After 50 years of research and 20 years of clinical development, a clear benefit of gene therapy has been demonstrated for 12 genetic diseases. These include 3 very severe forms of immune deficiency, 2 diseases triggered by the accumulation of toxic substances in the brain, hemoglobin diseases (beta-thalassemia, sickle cell anemia), coagulation diseases (hemophilia A and B), and a neuromuscular disease (spinal muscular atrophy). Some leukemias are also now treated by a dedicated gene therapy approach, CAR T Cells.

In the continuity of these new techniques, methodologies and applications, new developments and diversifications to other diseases are still expected thanks to the DIM Gene Therapy (Area of Major Interest) through which the Ile-de-France Region finances a very ambitious program for the benefit of preclinical work on sickle cell disease, metabolic diseases and mitochondrial diseases in particular.

At Imagine, gene therapy has been a priority since the creation of the Institute. It is at the heart of the work of several of our laboratories, alone or very often with partners. But it has also been the subject of the creation of a viral vector platform. Gene therapy is a major expertise of our teams, recognized at the international level, and is a wonderful example of Imagine’s virtuous loop, which starts with the patient and returns to him or her as quickly as possible

Gene therapy is a challenge for researchers, but not only. Imagine is leading the fight for access to care and to gene and cell therapies, in particular by going as far as possible in supporting its teams in terms of development and regulatory issues. It is in this context that a partnership was signed with Cellectis, a genome editing company specialized in immuno-oncology and gene therapy trials for genetic diseases, which has joined Imagine’s “lab-in-labs” platform for industrial partners. It is also in this line that Marina Cavazzana and Isabelle André, researchers at Imagine, along with Karine Rossignol, created the start-up Smart Immune in 2017 at Imagine, which aims to change the future of cellular medicine through a new generation of T-cell medicine.

It is in this field, finally, that the Imagine Institute has just achieved several successes. Two clinical studies conducted by Prof. Marina Cavazzana’s teams (AP-HP, Inserm, University of Paris, Institut Imagine) at the Necker-Enfants malades AP-HP Hospital, in collaboration with academic and private partners, published in Nature Medicine [1, 2] at the end of January, demonstrate the long-term success of gene therapy in sickle cell disease [3], beta-thalassemia and Wiskott-Aldrich syndrome [4].